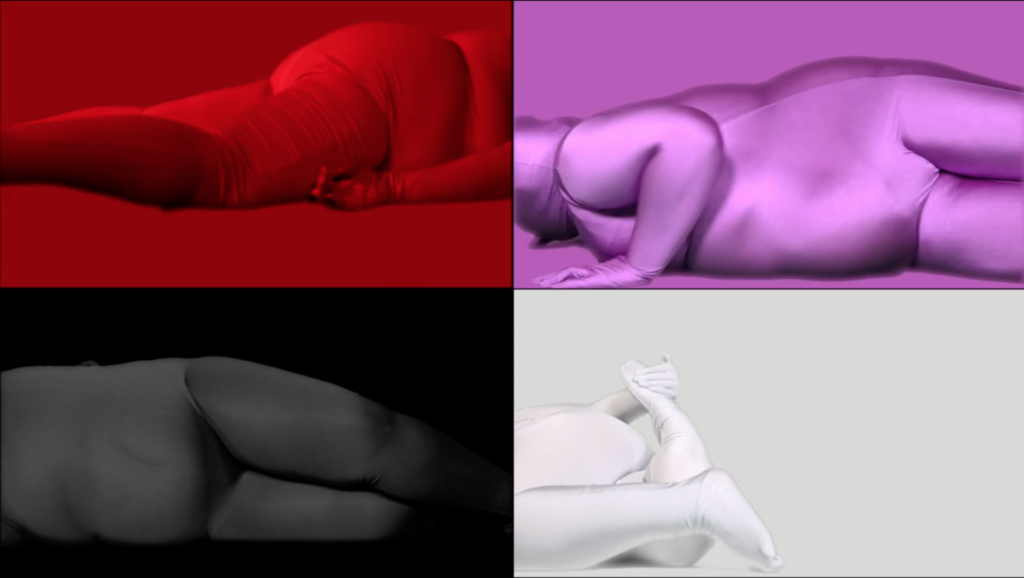 Through photography, videography, sound, and performance, I explore how bodies activate a space and how they are perceived in a social, political, and spiritual environment. I am interested in awkward, surreal, unnatural and unorganized bodily states by objectifying the body and the space it exists in. By presenting a figure without identifiable characteristics, I am attempting to represent the concept of the soul within. It is my way of symbolically presenting the individuality and the individual self through the understanding of the nature and nurture, soul and body, religion and spirituality, and space and void. All of these ideologies are often referred to as “the ipseity.”
I have also attempted to question gender politics through my performances. Most of my current performance and video pieces involves being still and making sculptural body movements. Within this practice, my body transforms from being a stationary object to a moving thing that is disfigured through movements before being recognized as a female figure. My body movements are repetitive, redundant, organic, and abstract with no dominating sense of axis or directional force. I move beyond my comfort zone and push my physical limitations as far as I can in the moment. The course of the movement is non-objective; it is a continuation of pathway and response to stimuli of the sound piece, the space, other art works and the audience. The repetitive movements may seem absurd at first, but over time become powerful reflections on life cycles, energetic flows, and complementary opposites. These repetitions eventually lead to exhaustion, becoming deep metaphors about life and death. The idea of “where my body once was” in a space becomes paramount and the sound pieces leading the performance make it into an inclusive auditory, visual, and psychological experience for the audience.
I believe that social identities are created through our ongoing social interaction with other people and our subsequent self-reflection about who we think we are according to these social exchanges such as agreement, disagreement, and negotiation with other people. We mostly construct our behavior and self-image based upon the back and forth social interactions. Similarities and differences become central to achieving a sense of identity and social belonging bringing in elements of exclusivity to self. Therefore, all of my works despite being about identity, are also an attempt to make the audience reconnect with a live human body devoid of markers of identity. My works are therefore a paradox in content and visual or auditory experience. The performances, sound and video pieces are aimed to generate thinking about self-healing, self-acceptance, and self-empowerment for the viewers by making them realize that we all have been socially-constructed (that is, created by societies, politics, religious and cultural groups). Generating conversations of identity thorough the relationship with each other as well as inspiring to deepen the connection between mind, heart, soul and body beyond the social constructs to connect with an authentic-self are some of the things my audience takes away from experiencing my works.